When looking for a gaming headset, one of the best value buys are those midrange options that hit that sweet spot of value and performance.

Creative Labs’ latest headset, the Sound Blaster X H6, aims to strike a compromise between pure audio performance and affordability. It boasts a wide array of EQ options, 7.1 virtual surround sound, and connectivity with PCs and all major gaming consoles.

You can pick it up right now for $79.99 on Newegg.com, GameCrate's parent site.​

On first glance, the H6 is relatively unassuming. It’s all-black paint job and traditional design may lack that initial “wow” factor, but once I put the headset on, I saw that there was more to the H6 than meets the eye. Creative wisely chose to spend its energies focusing on the H6’s comfort over purely visual flair, and that choice most definitely paid off.

The H6 conform to the shape of your head, creating a snug, but not oppressively tight, fit. The headset uses a traditional headband design, so the ear cups can slide up or down to reach the right height. The headband itself feels a bit like a miracle – it only has a thin piece of cloth padding, and yet I barely noticed it. Not once did it feel like it was digging into my skull – often a big problem I have with other gaming headsets.

The pièce de résistance on the H6, however, are the ear cups. They’re cushioned with a thick layer mesh fabric, making them super comfy and breathable. Even after hours of gaming, my ears didn’t hurt or sweat. If you’ve ever thrown your headphones off in a fit of rage because the damn things keep smooshing your ear into your head, you know how important that is.

I found the mesh fabric padding to be more comfortable than the more traditional leather earcups you’d find on other headphones. My only knock on the the earcups is that they don’t swivel, which can be annoying if you’re someone who likes to rest their headphones around their neck when they’re not in use.

The H6 also has RGB lighting, and you can customize the lighting with up to 16 million color options. Personally, I’ve never seen the appeal of RGB lighting on headphones – you’re never going to see it when you’re wearing them. Still, the lights look good, if only for swag points when they’re resting on your desk.

If there’s one word I use to describe the H6, it’s “versatile.” You can use the H6 on a variety of systems, from PC to consoles such as the PS4, Nintendo Switch, and Xbox One. There’s also a variety of output options, as the H6 interfaces with both USB and traditional 3.5mm output.

Unlike a lot of other gaming headsets which aim to sound good for video games and games only, the H6 comes with three onboard EQ profiles, for games, movies, and music. You can switch between them by pressing a button on the left ear cup. It’s a great system, but there are a few hiccups.

First, the EQ settings didn’t feel distinguishable enough. I could barely tell the difference between all three profiles, and preferred to use the neutral “flat” setting. Second, you only know which EQ profile you’ve selected based on the number of beeps you hear after you press the EQ button – one for games, two for movies, and three for music, with a longer beep indicating a neutral EQ. There’s no immediate way of knowing which EQ profile you’re on without memorizing what the beeps mean and cycling through all the options.

For the next version of this headset, it might be better to switch these profiles via software rather than on the hardware. Speaking of software, Sound Blaster’s Connect software has a veritable trove of options to sculpt and shape your sound, with tons of different profiles to bring life to specific frequencies and brighten up dull-sounding audio.

Perhaps the most unique feature on the H6 is ambiance mode. There’s a tiny microphone built in to the headset that can be switched on to listen for loud environmental sounds, like a smoke alarm or your mom yelling at you to clean your room. The idea here is if a loud sound is detected in your environment, it’ll pick up and play through the headset.

It’s a neat idea, but it’s better in theory than in practice. I couldn’t get it working consistently, and the H6 doesn’t block out enough ambient sound anyway to make it worthwhile. But Creative is at least committed to the idea – there’s a firmware update on their website that did improve ambient noise detection slightly. As a feature, ambiance mode is far from perfect, but it’s also easy enough to ignore. If you don’t set your hopes too high, you might use it once in a blue moon.

The H6 boasts 7.1 virtual surround sound. The effect is nice enough, but it pales in comparison to the real thing, and it makes most audio sound a bit like you’re underwater. If you really want to simulate surround sound, it’ll do in the pinch, but like the ambiance mode, it’s not worth buying the headset for. Also, note that the virtual surround sound only works over USB.

The H6 is powered by a pair of 50mm neodymium drivers. These give the H6 a powerful, punchy presence – gunfire has a nice, authoritative boom to it, and enemy footsteps feel accurately placed, and kills feel viscerally up close and personal. For those who play more than just shooters, the H6 has you covered, too. I’ve been playing a lot of hard-as-nails 2D platformer Celeste lately, and the H6 made the soundtrack and ambiance sound gorgeously immersive.

Beyond games, the H6 sounds great for music. On a neutral EQ profile, the H6 has a warm presence, with a bright midrange that’s great for rock and jazz. While it lacks the deep, rumbling bass that metalheads crave, it’s perfectly serviceable for all genres. So many gaming headsets out there are disappointingly mediocre when it comes to music, so it’s great to see a headset that can work as an all-purpose driver.

The H6’s microphone is about what you’d expect from a gaming headset – it’s perfect for communicating in-game with teammates, but a bit wanting if you were trying to stream, podcast, or do any other more serious audio work. As an added bonus, you can adjust the amount of noise cancellation with Creative’s Connect software. The microphone itself is also detachable. It’s great if you plan on traveling a lot with the H6, or for occasions where you simply don’t need the microphone.

Overall, despite a few nitpicks, there’s a lot to love about the Sound Blaster X H6. They’re not only incredibly comfortable, but they sound fantastic in-game, and are decent enough with music that they could work as a pair of everyday headphones. 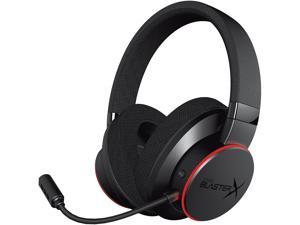 Quite a few features, but not all are super useful.

Incredibly comfortable, that was a clearly a priority here.

Good gaming soundscape, and not too shabby for music either.

Review: Dragon Ball Z: Kakarot is the best interpretation...
Reviews
Jan 22, 2020
For a long time, the Dragon Ball Z video game formula was set in stone. They were always these heavily unbalanced mash-heavy fighting games with...

Review: Doom: Annihilation doesn’t pretend to be anything...
Reviews
Jan 20, 2020
If there’s one game franchise that has never taken itself too seriously, it’s id Software’s Doom . Even Bethesda’s most recent games (2016’s Doom and...

Review: Weakless is a heartfelt puzzler with some rough...
Reviews
Dec 31, 2019
Platforms: Xbox One (reviewed), PC (early 2020) I loved playing Weakless . The game, from Punk Notion and Cubeish Games, has a lot of things that I...

Review: Shovel Knight: King of Cards brings the Shovel...
Reviews
Dec 23, 2019
Platforms: PC (reviewed), PS4, Switch, Xbox One It’s been a long and winding road but the journey of Shovel Knight is now over. This one indie game has kind of...