Crossover games are tough. Obviously the goal is to make something that fans of both franchise will enjoy, staying true to what makes them each special. But at the same time you want to make something that can stand on its own and have a sense of identity unlike anything else. It’s a difficult balance to strike, and developers can rarely pull it off.

Luckily, Ubisoft has done just that with Mario + Rabbids Kingdom Battle by creating a surprisingly deep, consistently rewarding, and ridiculously charming turn-based strategy game. After my E3 Mario + Rabbids demo I was excited, but skeptical. The Rabbids haven’t been in the spotlight much in years and Mario and co. aren’t exactly known for taking up guns. In the end though, somehow, some way, despite the odds, this is a game that actually works. And it doesn't just work: it's great.

At the beginning of Mario + Rabbids an intrepid inventor is working on a device that has the power to combine two seemingly different things together, like a plant and a toaster or something else wacky. For all intents and purposes it looks a bit like a VR headset, but the visor is used to target objects. Somehow the Rabbids come barreling into the inventor’s workshop using a teleporting washing machine and then find themselves tumbling through the sky into the Mushroom Kingdom. Chaos ensues, the whole world gets turned upside down, and you’ve got to take charge and figure out what’s going on.

For the most part the story exists to keep pushing you forward and that’s about it. There aren’t many plot twists or surprises, but the writing is on point. Fans of Mario’s various spin off titles like Super Mario RPG or the Paper Mario series will find a lot to love here. There’s a ton of witty banter back and forth and the Rabbid versions of Mario, Peach, Luigi, and Yoshi are all absolutely adorable with distinct personalities.

Mario + Rabbids is a mostly linear game, as you spend your time going from one Chapter to the next through different Worlds. The first World, Ancient Gardens, is your standard green-themed area with a lot of traditional Mushroom Kingdom-style architecture and designs. After that is the Sherbert Desert which is very likely a play on how the words “desert” and “dessert” are both so similarly spelled. Ice cream and sand don’t usually go together, but that seems to be the underlying premise of the game: make things work that probably shouldn’t.

Meat on the Bone

When I started playing Mario + Rabbids my gut expectation was that it would be a game full of style and flair but lacking in substance. I couldn’t have been more wrong. As it turns out this game is jam-packed full of content, customization, and progression mechanics that keep you entertained for far longer than you’d think until it’s all over.

Your party consists of three characters (Mario, Rabbid Peach, and Rabbid Luigi are the starting group) but you get a cast of eight total characters to pick from as you unlock and find the rest throughout the game. Each character has different abilities, stats, and weapons to choose from, making it extremely satisfying to swap them out and try them all during your playthrough. Thankfully you can swap characters and weapons before each fight so you don’t get stuck exploring a World with a party and wish you could alter the lineup halfway through.

Between fights you’ll find an assortment of puzzles and explorable environments to sift through. You can move through to the next fight very quickly if you want, but there are lots of hidden collectibles and special weapons to find if you dedicate the time. You’ll also unlock alternate pathways through previous levels as you gain new powers as well, which encourages a healthy amount of backtracking if you’re a completionist.

On top of the core campaign there is also the chance to go back and replay sections to get better ratings and more coins as well as a cooperative combat arena full of its own challenges and missions. Online competitive multiplayer would have been great, but there is definitely room for something like that as a DLC item, especially considering the game is confirmed to have a Season Pass.

Mario + Rabbids is a turn-based tactical strategy game similar to the likes of XCOM, The Banner Saga, Fire Emblem, Advance Wars, and others. Each side takes turns by having each of its units perform actions like moving and attacking and then letting the opponent take their turn. Everything starts out simply enough as you need to utilize cover, stay mobile, and use a mix of melee and ranged attacks to win. Over time though you’ll unlock tons of abilities and modifiers that dramatically expands the possibilities during battle.

For example, you can not only move around the battlefield by having characters directly walk, but you can also have them jump off of a teammate for a “Team Jump” that sends them flying up and through the air. This is great to reach higher ground, extend your movement, or even to land on top of enemies for damage in some cases. Characters like Mario get giant hammers for big melee damage in addition to their blasters, but then others like Luigi specialize in doing damage from a long distance.

Choosing the right team of characters for each specific battle is extremely important. Through the course of the game you’ll earn coins that can be used for buying new guns, each of which have their own stats and bonuses. For example, the “Bounce” modifier has a chance of sending enemies careening around the battlefield and potentially even flying off ledges. Certain cover blocks can be destroyed, pipes and tunnels expand traversal options during a fight, and a wide assortment of enemy types always keep things interesting. Some of the later fights in the game really lasted a long while and offered up much more of a challenge than I was expecting -- which is a very good thing for games like this.

Each fight gets a rating that gives coin bonuses based on performance and how quickly you complete the objective. Not all fights require you to defeat all enemies as some of them can be finished by only defeating a certain number, reaching a specified zone on the map as quickly as possible, and so on.

More Than Meets The Eye

Mario + Rabbids Kingdom Battle probably should not be as good as it is. Ubisoft and Nintendo have struck gold with this crossover and delivered something truly special. The Legend of Zelda: Breath of the Wild and Super Mario Odyssey aren’t getting unseated as the biggest Switch games of the year, but this one came out of nowhere as a true sleeper hit of the Summer.

Other than some inconsistent pacing, a throwaway story, and fewer multiplayer options than we were hoping for, there really isn’t much to complain about unless you just can’t stand the Rabbids. They can get a bit grating at time, but their annoying factors are definitely toned down here in favor of clever and silly antics balanced with the level-headed flair of Nintendo’s core Mushroom Kingdom family. 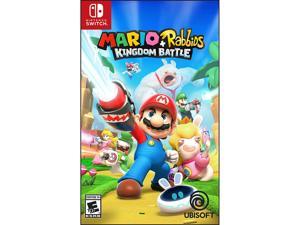 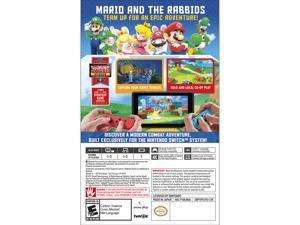 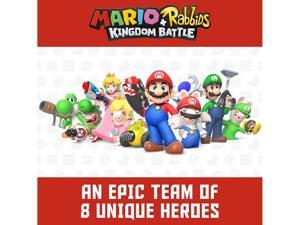 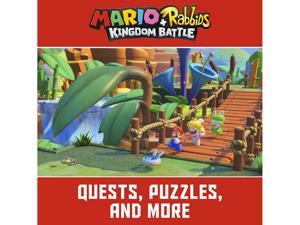 8.25 Mario + Rabbids: Kingdom Battle is an unexpected delight. Fans of tactical strategy games should absolutely pick this one up as soon as possible and enjoy dozens of hours of intense battles and detailed progression.
9

The bright visuals of the Mushroom Kingdom look fantastic and the animations all stand out during fights. It’s fun to watch and never gets boring on the eyes.

It’s exactly what you’d expect with a few surprises sprinkled in for good measure. Grant Kirkhope, as expected, crafted a wonderful score for this one, though the first half of the game is weaker than the second.

Navigating the battlefield feels great, the difficulty curve of abilities is very well paced, and even the boss fights had clever challenges waiting for me. Combat is very addictive.

The linearity of the story means it's paced almost perfectly, but there is little reason to replay things unless you just want a better score. Areas are large and fun to explore, but not actually very open in practical terms. Once finished, I didn’t have the urge to return before DLC arrives.