Borderlands 3 has only been out for a little while now, and FL4K has soared ahead as one of the most popular Vault Hunters in the game already. This probably surprises no one, as Borderlands has been trying to nail down the companion-controlling Ranger (or... Mechromancer?) fantasy since the first installment, and FL4K is the wonderful result of all that trial and error.

The interaction he shares with their pets makes them feel like members of the squad rather than just random summonables, and DPS-counting fanatics are just as in love with them, because those pets pack a punch. And since you're here, you’re either looking up FL4K builds or you’re clicking through them on social media in order to up your damage numbers with the smooth-talking murder bot. You want to know which abilities to lock in when you level up (or re-spec) that will allow you to stomp your way through outer space with as much ease as the Calypso twins repeatedly outsmart the Crimson Raiders.

You'd think that after walking into 17 traps in a row (that were all executed the same way), Lilith would expect the next one, but that's a discussion for a different day. For now, let's talk numbers. 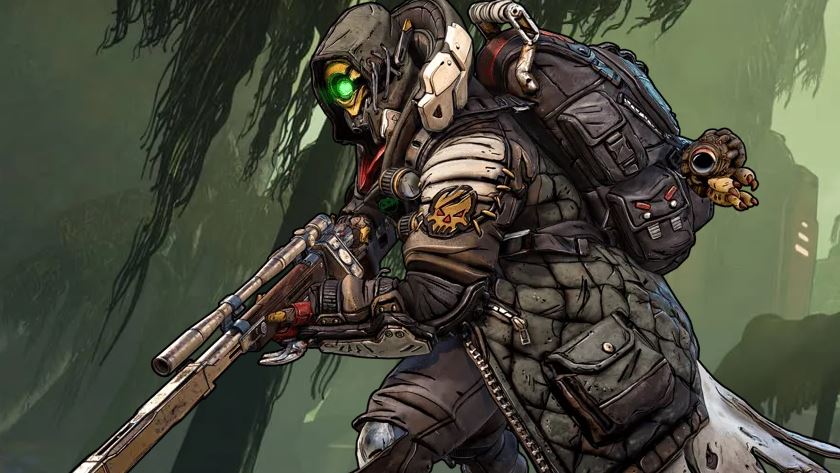 Figuring out builds in Borderlands 3 is a little bit like a math problem. By the time you hit level 50, you're given 48 skill points to dish out, and that means you have to figure out which skill trees will get those points, and in what order, to maximize the effects of the skills you select. Luckily for you, I took a pen and paper into a dark and shadowy corner of the Newegg studio and isolated myself like a creep until I figured this one out.

In order to maximize damage, you'll want to spend your 48 points in both the Master and Hunter skill trees. They're split almost evenly, but you'll have a few extra points in the Hunter tree just so you can reach the end of the tree and get that gnarly permanent 20-percent crit chance passive buff. This means you'll have 26 points in Hunter and 22 in Master. Although you have less points in Master, you'll want to start by putting points in that tree when leveling up, and when you hit your 22, then you can start putting them in Hunter. Hunter is all about crit damage and crit chance, and the baseline damage buffs in Master are going to be better on their own than vice versa. Here are the trees. 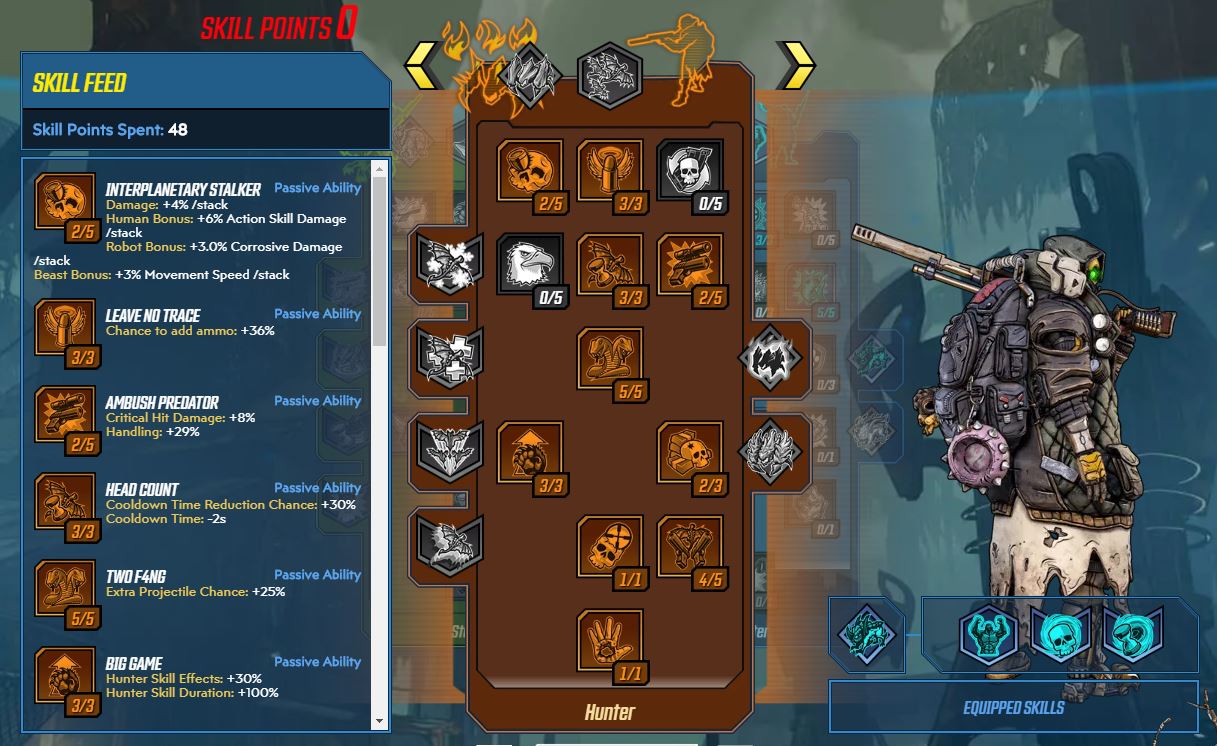 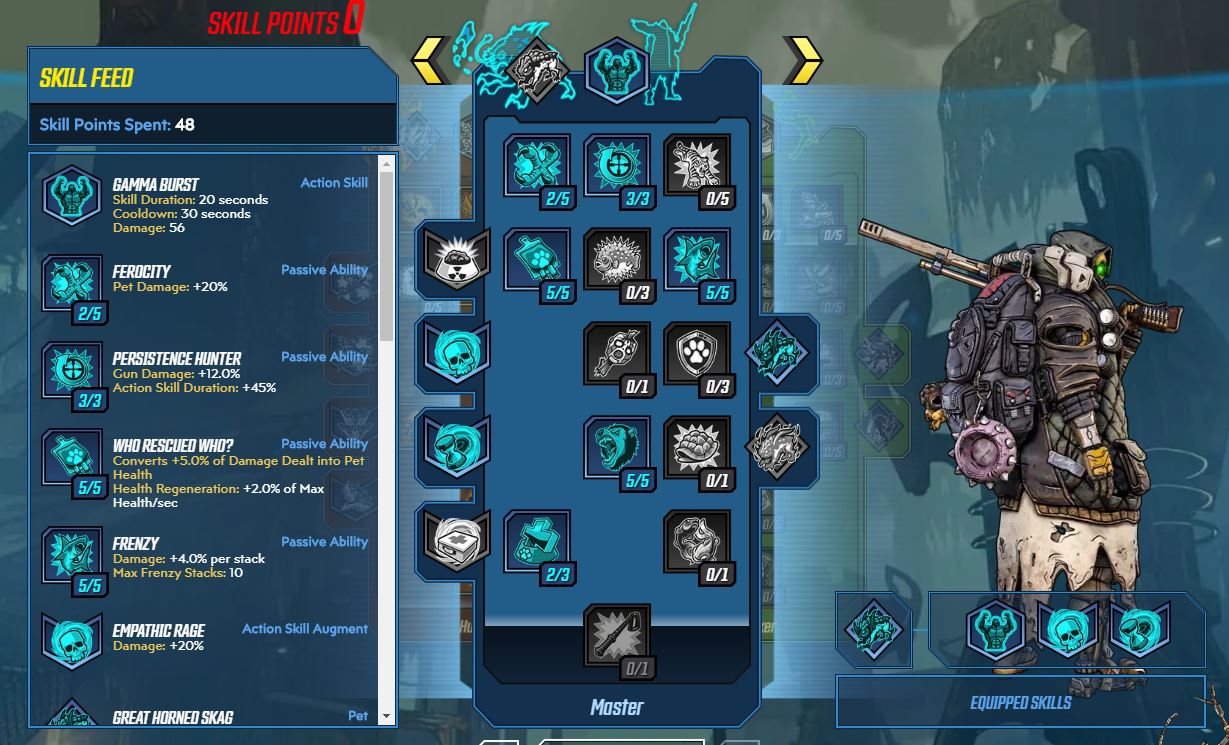 The Master tree is all about providing flat and stacking damage buffs to FL4K and their pet. That’s why Master is the guts and backbone of the build, and it’s why you want to start with it when leveling up. Unfortunately, this means you’re also incredibly squishy. To supplement your lack of any damage mitigation or sustain, you’ll want to take all five points of Who Rescued Who? to at least make sure you’re healing up a bit while dishing out all that sweet, sweet damage. Otherwise, this is a simple tree. Most options that provide a percentage boost to your overall damage or gun damage, you take, and when you combine them all at the end, it’s an absolutely immense buff.

Hunter is all about getting more bang for your buck. You’ll land more crits, your crits will deal more damage, your mag sizes will be longer thanks to regenerating ammo, and you’ll shoot more bullets per shot. All of these buffs simply take the incredibly mountainous damage buffs from the Master tree and amplifies them into oblivion. If one bullet deals triple damage thanks to Master, what happens if you fire two bullets at the same time? What happens if both bullets crit, no matter where you hit the enemy? What happens if that critical damage is 250 percent instead of the normal 200 percent? It’s all about stacking more and more on top of all that damage, and the results are—quite appropriately—disgusting. Bloody, gory, and disgusting. 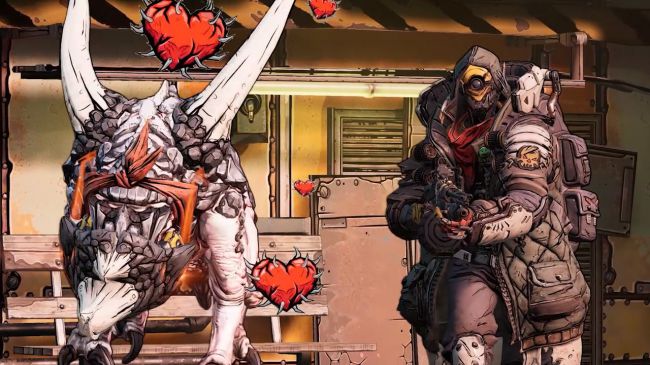 As your skill trees multiply and amplify your damage output, you want your pet and active skill to do the same. Using that logic, it’s an easy choice. You want the Great Horned Skag. Want to know why? They give you a five percent bump to your overall damage and another 10 percent to your gun damage, and those are doubled to 10 and 20 percent with five points in Maxed Out. That’s… just so much damage.

But hey, this build would be nothing with just “so much damage.” We need more damage than even that, right? Right. So, you’ll want to take Gamma Burst as your active, paired with the Empathetic Rage augment, which gives you another 20 percent damage boost when Gamma Burst is active. With such another large damage amplification, playing around your Gamma Burst power spike is going to dictate the rhythm of your combat. That means you want it available as often as possible. And with the Endurance augment and three points in Head Count, that won’t be a problem. 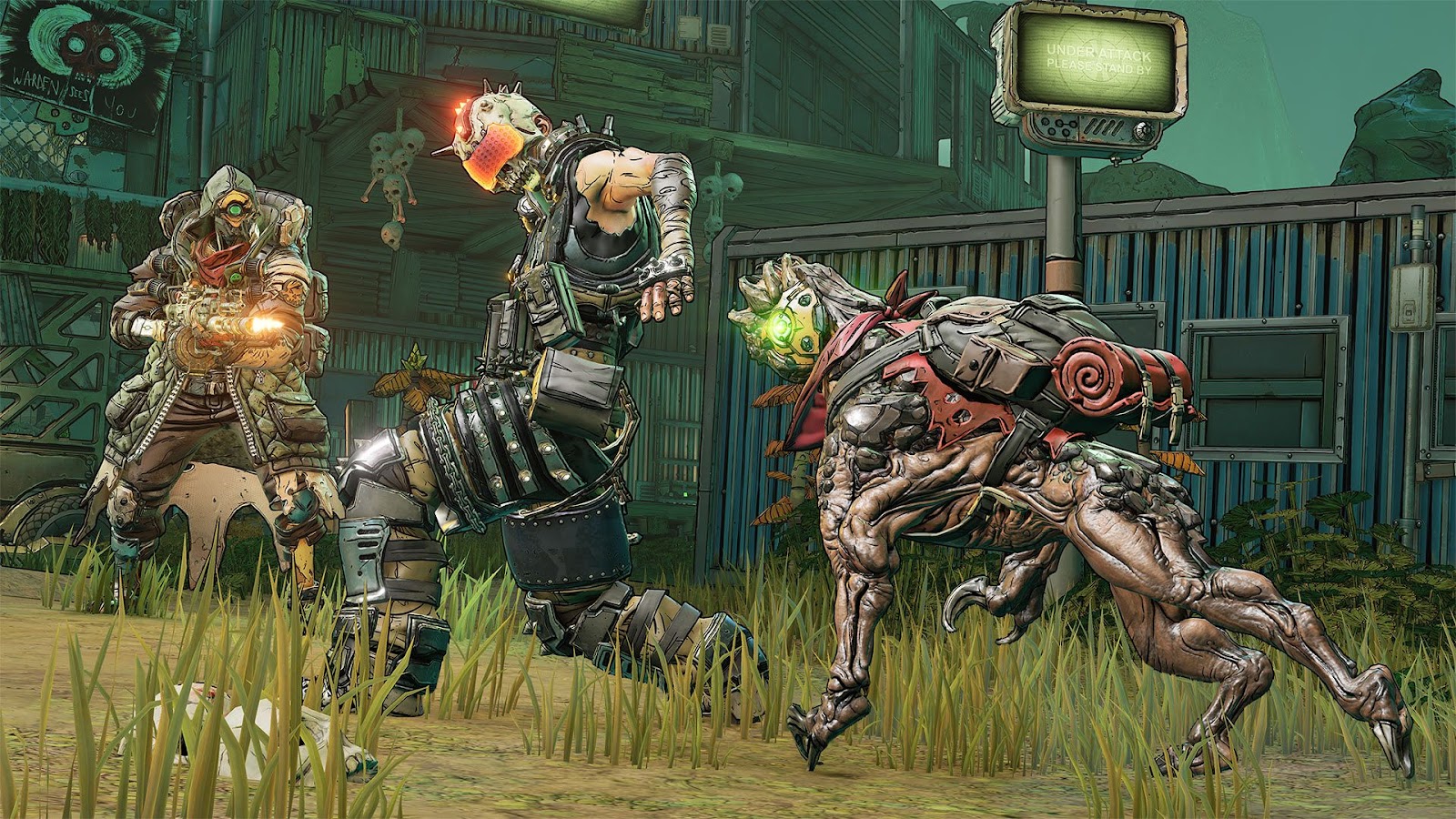 Now that you know the skills and you’ve got the bills (I guess, that’s just something Marcus says), it’s time to put them into practice. For starters, you need to understand the difference between “Damage” and “Gun Damage” in Borderlands 3, because it comes up quite a lot in the skills we mentioned earlier. It’s simple, and there’s a good chance you already know the answer, but I’m going to explain it anyway. Damage qualifies all outgoing damage, including any elemental damage you apply. Gun Damage is just that top damage number you see when you hover over any gun in your inventory.

Typically, you want to find guns that have higher base damage, because that means it’ll get boosted both by Damage and Gun Damage, but that doesn’t mean you can’t go for more element-focused weapons. That means you’ll probably want at least one Jakobs six-shooter in your rotation somewhere, but there’s freedom to explore.

As for playstyle, you need to just keep in mind that this is a very squishy build. You have regeneration, but it’s slow and limited, so play back and play safe. You don’t need to be up in the middle of the action when every bullet from a sniper has the potential to instagib a Bruiser. Speaking of which, you’ll want to start with your big, slow hitters. A lot of FL4K’s damage in this build is ramping, being amplified and stacked through attacks or kills, which means you’ll have to waste a couple of baddies before you’re dealing maximum damage.

When you knock down a few people, though, you can switch to something with a higher fire rate and start advancing on the field and into the fight with your not-so-furry good boi. There are some really great end-game SMGs to look for that help for this stage of battle, like the Hellfire, a legendary SMG with high fire rate, raw damage, and over 500 fire damage-per-second when applied (before boosts).

Strategy really only matters when you’re in True Vault Hunter mode, though. Before that, just grab whatever guns look cool and go buck wild. You won’t be disappointed.

News
Nov 20, 2019
Vault hunters have been traversing Pandora in Borderlands 3 since September and have been itching for something new to do. Luckily, the folks at...

Borderlands 3: What class should you play?

News
Sep 20, 2019
Borderlands 3 is out and that means that you have a whole new batch of Vault Hunters to play as. This time around, skill trees don’t really inform...

News
Sep 18, 2019
Maybe you stumbled upon this page looking for treasure, or maybe you are new to the Borderlands franchise and have absolutely no idea what SHiFT...